Every once in awhile we are able to publish our findings. This is few and far between just due to the nature of our contracts with clients. We do release some findings usually found on The Cyber Shafarat (www.cybershafarat.com). The information link on this page represent those documents.

Our customers benefit from 17 years of cyber intelligence experience combined with years of boots-on-the-ground collection and analysis. Enhance your cyber and threat intelligence program with Treadstone 71.

A dozen years ago, Treadstone 71 shifted adversary targeting from strictly cyber jihadist activity to include Iran. We tracked movements of the earliest hacking groups following their activities from low-level defacements to repurposing Stuxnet to become a recognized global power in cyber and influence operations. Treadstone 71 specializes in monitoring Iranian cyber and influence operations, research hacking groups, and regularly post information and intelligence on their activities. Many posts describe the Islamic Revolutionary Guard Corps (IRGC) and Ministry of Intelligence and Security (MOIS) cyber activities, organizational structures, internal recruiting methods, educational activities, cyber conferences, information on malware, and threat actors and their capabilities. We continuously seek patterns and trends within those patterns. We examine adversary tendencies in online forums, blogs, and social media sites. In the run-up to the 2020 U.S. presidential election, we focused on social media and looked for possible infiltration that would affect voters. In the run-up to the 2020 U.S. presidential election, we focused on social media and seeking possible influence operations that may affect voters. In July of this year, we came across highly unusual spikes in social media activity that, at first glance, seemed random. A closer look led us in a direction we did not expect. As with many strategic intelligence analysis efforts, collected data is the evidence driving the findings. The findings herein led us down a path we did not expect. 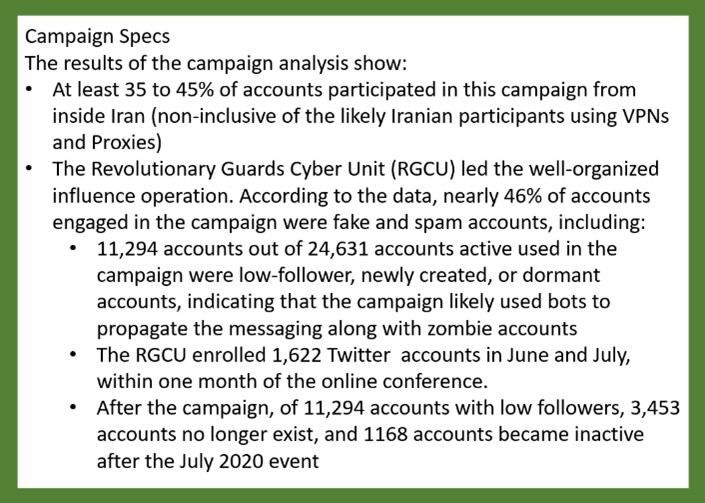 At least four accounts played an essential role in managing the campaign to ensure the hashtag trended in Iran. At least nine other accounts belonging to IRGC Cyber Units were responsible for managing and expanding the campaign in different social environments. (Figure 1 in the report)

The latter, most with high followership, portrayed themselves as "monarchists," "reformists," or "regime change advocates" in various social environments while tweeting contents to fit the description, playing a serious role under the given persona in mobilizing and expanding the campaign against the MEK.

A significant feature of these accounts is young women's personas disguising themselves while attracting and luring unsuspecting users for messaging expansion and potential collaboration.

The RGCU launched the primary campaign on July 17 at 16:59 CEST, immediately after the speech by Maryam Rajavi, starting the process of audience involvement, account mobilization, and hashtag repetition. The coordinated launch helped to create identifiable Twitter trending. The RGCU expanded the campaign by distributing and republishing influential core members' tweets and content. The republishing triggered thousands of bots and fake accounts with low followership belonging to Basij Cyber Units.

With the entry of influencers (Figure 3 in the report), the campaign entered the next operations stage. The content and tweets were distributed and republished by those influential IRGC Cyber Units. The narrative between these users reveals their role in promoting the campaign and the purpose of the personas.

Thousands of bots and fake accounts with low followership belonging to Basij Cyber Units widely republished and retweeted tweets published by influencers and retweeted and promoted the posts by other accounts that had used the given hashtag.

This campaign was continued for 60.6 hours by the IRGC Intelligence Cyber Units using thousands of low paid Basij accounts resembling a Dunbar's Number concentric circles of trust throughout the country (Figure 4 in the report).

Campaign Overview and Analysis Based on Available Data and Research:

A Russian publication reported this week that the Russian Armed Forces have deployed their Resonance radar system in an area near the Israeli border.According to the NZIV publication, the Russian Resonance radar was identified in two locations in the eastern Mediterranean region, including an area along the Israeli-Egyptian border.The technical capabilities of the Resonance-N radarContinue reading "Russian radar system discovered near Israeli border:"

The RFI process includes any specific time-sensitive ad hoc requirement for intelligence information or products to support an ongoing event or incident not necessarily related to standing requirements or scheduled intelligence production. When the Cyber Threat Intelligence Center (CTIC) submits an RFI to internal groups, there is a series of standard requirements for the context and quality of the data requested.

The official catalog of the Ministry of Defense of the Islamic Republic of Iran about the migrant drone 6 and some of its features In our region, Iran and Turkey offer very diverse UAV products. According to the request of the members of the channel to compare Turkish UAVs with Iran, we will summarize oneContinue reading "مهاجر ۶ Read the Ministry of Defense Feature Sheet Mohajer 6"

Our training examines Sherman Kent's Analytic Doctrine from the cyber perspective as well as the availability and use of OSINT tools. Students are able to understand the cyber intelligence lifecycle, the role and value of cyber intelligence relative to online targeting and collection, in modern organizations, businesses, and governments at the completion of this course and, use of our advisory services.

Doing the same thing over and over again is truly insanity.

The post Break the Paradigm appeared first on The Cyber Shafarat - Treadstone 71.

What you receive from Treadstone 71 is detailed information and intelligence on your adversary that far surpasses the technical realm. Where Treadstone 71 service excels is in the ability to provide you with techniques, methods, capabilities, functions, strategies, and programs to not only build a fully functional intelligence capability, but a sustainable program directly aligned with stakeholder requirements.

What Intelligence Can and Cannot Do

This intelligence brief explains the intricacies as well as cans and cannots with repect to the capabilities of cyber intelligence.

Understanding your stakeholders and what they need to help make decisions is more than half the battle. This brief covers the old adage “Know your professor, get an A."

This second video that you see is related to six in the morning. Published by Al-Alam. In fact, Iran is releasing these two videos, saying: USCentcom statement on Iran’s provocative actions is a big lie. The United States has twice failed to heed warnings and “risky behaviors” twice in two different hours of the day,Continue reading "Iranian Propaganda"

Bulletproof Vests – Make them yourself

Syrian violations of sanctions with Russian FSB assistance to manufacture ballistic vests – Not discovered by any organization other than Treadstone 71 - No sensors, no aggregation of thousands of taps – Just hard-nosed open-source collection and analysis, and an interesting read of false identities, dispersed purchasing, and deceit.

Hacker claimed to have infiltrated the regional power systems of #Qom province and shared some examples with the general public. These examples include testing open ports as well as entering the FTP server and several other system models. Several published photos are related to #Arak Heavy Water Location and also entering the industrial devices ofContinue reading "Hackers hit Parand and Arak, Iran"

An academic review of these nation-states and their work to achieve cyber operations dominance.

Intelligence Games in the Power Grid

Unusual purchasing patterns from a Russian firm selling PLCs from a Taiwanese company with massive holes in its product software download site. What could go wrong?

The post Mahan Air – Blamed for COVID-19 in Iran appeared first on The Cyber Shafarat - Treadstone 71.

Thou shall and thou shalt not. Own the cyber street while building creds. Follow these rules and maybe you will survive the onslaught.

Iranian incitement of hate against the State of Israel

All students, university professors, international activists and other experts are invited to submit their ideas and suggestions on the occasion of World Al-Quds Day in light of the current situation (the spread of #Coronavirus) and as alternatives to the march, by contacting the following IDs Deadline for submission of suggestions and ideas: 17 to 26Continue reading "Iranian incitement of hate against the State of Israel"

The post Iranian incitement of hate against the State of Israel appeared first on The Cyber Shafarat - Treadstone 71.

Read more: Iranian incitement of hate against the State of Israel

Much has been written about Mr.Tekide and his crypters used by APT34 (OilRig) and others. Other

However, identifying Mr.Tekide, his background, locations, and his own words has never been openly accomplished. Many believe that following an individual does not pay dividends. Treadstone 71 demonstrates the alignment of Mr.Tekide to the Iranian government through years of support using crypters such as the iloveyoucrypter, qazacrypter, and njRAT.

This brief covers some general taxonomy along with a review of common mistakes concerning cyber and threat intelligence and how possible to not fall into these traps while knowing how to dig out if you do.

Contact Treadstone 71 Today for all your Cyber Intelligence needs.